Feature Dog of the Month: Bandit

I’m Bandit…as well as being a bandit when it suits me.  Until I came here, hardly anything ever suited me which isn’t really surprising and my owner at the time, was insensitive enough to call me LUCKY! 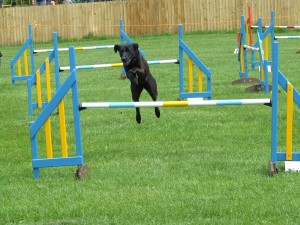 I was left alone a lot, shut in with nothing to do and no-one to play with.  It upset me a lot because I am actually quite bright and its not as if I was asking for much….anyway, one day my blue plastic collar (complete with dangly heart) was attached to a brand new chain and leather lead!  I was taken outside and put into a mobile box.  I know it was mobile because if I peeked out, I could see houses and trees and things whizzing past.  When we stopped, I can’t say I was anything except terrified.  My tail was jammed between my legs so hard I never thought it would wag again…..then someone asked me to “sit” – it was probably one of the best moves I ever made as I have been here ever since….and what a place!  There’s even a resident cat!  That was the first time my legs had ever had a good stretch (although it seemed to provoke an unwelcome response in a sub-sized human!)  After that, my legs were stretched regularly in wide open spaces so I had plenty of room to run out of the way when I saw another dog and I could outrun almost all of them!  I have now lost my anti-social tendencies which have now converted to curiosity, except that is, on the patch which is now MY territory.  Yep, it’s my very own patch and I love it.  I’ve even come to terms with the cat and now give it the occasional wash… but only because it lives here… it’s a resident’s privilege……x

Posted in Feature Dog of the Month